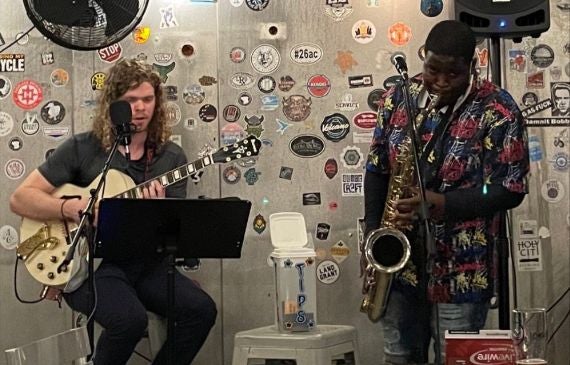 The Pick and Blow Duo is composed of two members. Keelan Kick Bozman and Platinum Knight.

Keelan Bozman is a performer, educator and outdoor enthusiast. He first started playing when his father challenged him to put down the Guitar Hero video game and pick up a real instrument. He soon began taking formal lessons and writing his own songs. Keelan works as a middle school band teacher, private lessons instructor and performer.

Hailed as “North Carolina’s Ear Candy”, Platinum has been bringing smooth and contemporary jazz to the Charlotte area for over a decade. Starting at the age of three with his first violin, his passion for music has blossomed into an inspiring career as a saxophonist, clarinetist, bassist, vocalist and drummer.

The two met while playing Jazz in Bill Hannah’s Jazz Ensemble at Central Piedmont Community College and have been wowing crowds in the Charlotte Metro Area ever since.