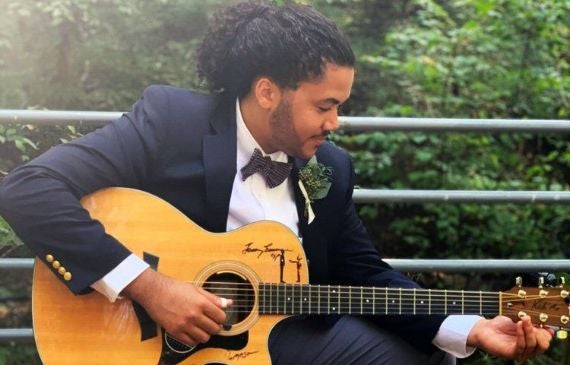 A native of Statesville, NC Eli Yacinthe has always been immersed in music.  Throughout his childhood he sang with his mom, at home and church.  When they watched musicals together, he was fascinated with the elaborate orchestration.  Eli found he possessed a variety of musical gifts, including the ability to extrapolate individual notes and reproduce them verbatim -- even intricate harmonies and rhythms.  He learned drums at age two, and later, piano – but always preferring to play by ear.

At 10, Eli’s father taught him to play guitar, but it wasn’t love at first chord. His fingers burned from constant practice.  “After a few days I hated that thing, I hated it so much,” he says.  But then he viewed a video of finger style guitar virtuoso Tommy Emmanuel, and his mind was changed forever. “From that point I became obsessed, I just never wanted to put it down. I didn’t want to play video games or whatever the other kids were doing. I would spend hours in my room learning songs, or trying something new.”

Now Eli rocks the house and has garnered an enthusiastic following performing all styles of music:  jazz, blues, country, rock, R&B and even big band.  He approaches each song, each note, with an authentic energy and sensibility.

Fans applaud the distinctive sound of his voice, which ranges from soulful to snappy. His guitar virtuosity combined with his rich and soulful vocal style make an instant impression.

A career highlight was Eli’s performance at 2017’s MerleFest, for an audience of 9,000. “It was surreal to me,” he says.  “I was so nervous, but when I got on stage everything just went away, the crowd was so supportive, and it just felt right. Like I was meant to be there.” A few weeks later, Eli performed to a sold-out crowd on a full scholarship at Nashville’s Fine Arts Summer Academy.  Since then, he’s taken instruction from a list of renowned guitarists such as Richard Smith, John Knowles, Pat Bergeson, and John Jorgenson.

In a world where critics prefer to classify music into specific genres, Eli defies categorization.  “Music is my life’s work” comments Eli.  “It’s definitely my calling.”