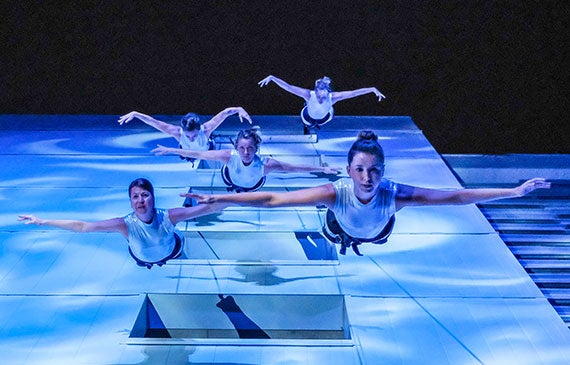 BLUE LAPIS LIGHT is an aerial site-specific dance company. Using aerial techniques along with classical, interpretive and modern dance, we strive to transcend athleticism, capturing poetry in movements and a dream of the infinite.

A non-profit organization, Blue Lapis Light explores innovative forms of expression, inspiring and elucidating performers and audience members. We are committed to producing an annual major aerial dance production in Austin, Texas, as well as creating other works and outreach programs throughout the year, including local and national productions.

Artistic Director Sally Jacques has been producing site-specific dance for the last 28 years, first under the name Jacques Productions, changing to Blue Lapis Light in 2005. Early works were not aerial but by 1998 performers began pulling upwards, literally: first scaffolding, poles and ropes; then webbing, bungees and hoop swings. By 2003, dancers were in the air on cloth; and by 2006, they were over and off buildings, utilizing new aerial equipment, harnesses and rigging necessities that require new levels of expertise and technical knowledge. Blue Lapis Light has retained the services of a core of professional riggers (led by Corey Fields) to facilitate these ongoing and ever-changing technical needs.

Ascension and descension (both literal and metaphorical) are ongoing themes in our work: flight of the body through space, daring physical limitations; flight of the soul through life/death; daring spiritual reservations; always reaching for the rapture of nature here and beyond.

Blue Lapis Light's major breakthrough production came in June 2006 when Requiem was held at the infamous abandoned Intel Building (with over 150,000 sq.ft. of space) in downtown Austin, Texas. Requiem featured 19 performers (led by dancers/choreographers Laura Cannon and Nicole Whiteside) and 18 technicians (including lighting, rigging, and sound). Requiem quickly became one of the cultural highlights of the year in Austin (Blue Lapis Light was subsequently voted 'Best Dance Company' in the Austin Chronicle's 2006 Reader's Poll), and was reprised in October 2006. Through its 33 performances, Requiem was seen over 14,000 people.

After Requiem, Blue Lapis Light's prominence grew, which led to performances at the historic Seaholm Power Plant and the Federal Buildings in downtown Austin.

Blue Lapis Light is also committed to offering ongoing classes and workshops in the development of aerial dance skills, held at our studio in South Austin. Youth Taking Flight, an outreach program that reaches youth in the Austin area, was established in 2008.