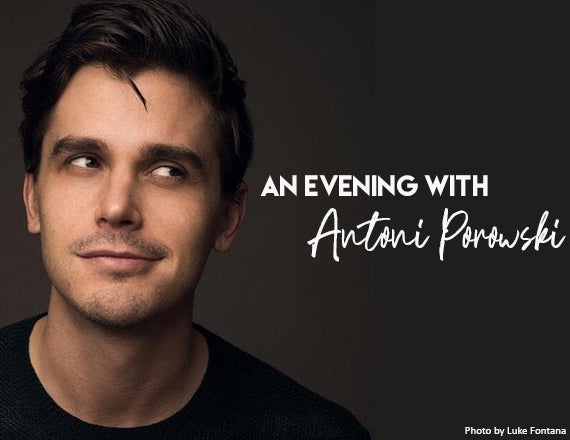 Antoni Porowski is a New York Times Bestselling Author and star of Netflix’s hit series Queer Eye. As the show’s food and wine expert, the self-taught cook brings with him a lifelong passion for food first cultivated through television, where he was captivated by culinary giants like Julia Child, Jacques Pépin, and Anthony Bourdain, and later honed in restaurants from Montreal to New York and under mentor Ted Allen, original Fab Five food and wine expert. Antoni’s first cookbook, Antoni in the Kitchen, was released in Fall 2019, debuting at #2 on the New York Times’ Best Seller List. His next cookbook, Antoni: Let’s Do Dinner, is set for release on September 14th, 2021.

Antoni can currently be seen in Netflix’s Emmy Award-winning series Queer Eye, which has won “Outstanding Structured Reality Program” for three consecutive years. In 2020, Antoni and his fellow Fab Five received their first Emmy nominations for “Outstanding Hosts For A Reality Or Competition Program.” Coming up, Antoni is developing a feature film for Netflix with Black-ish creator Kenya Barris loosely based on Antoni’s real-life dating experiences as a sexually fluid man entitled Girls and Boys.

Antoni has graced the covers of Gay Times, Out Magazine, Fashion Magazine, and Entertainment Weekly, where he and his castmates were listed among 2018’s Entertainers of the Year. A finalist for People’s Choice Reality TV Star of 2019 and 2020 and winner of Eater’s 2018 #Brand of the Year and People’s 2019 Readers’ Choice Sexiest Reality Star, Antoni continues to connect with audiences the world over.

Born in Canada to Polish emigrants, Antoni is an outspoken advocate for LGBTQ+ rights everywhere, especially his family’s native Poland.

An Evening with Antoni Porowski